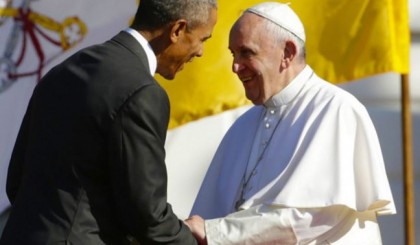 “Like a frog that doesn’t know when to jump from slowly heating water,” we are coming to the boiling point, based on biblical signs of the apocalypse. Six news items from this past year suggest that trouble is impending.

1. Signs of Corruption: Obama Gave $79 Million to the Catholic Church to Force (Muslim) Invasion as a Paid Agitator in 2014. That’s $6 million more than they got in 2013. (Google) How stupified can Congress be? “Congress shall make no law respecting the establishment of religion.” We wonder where the people in congress are who will honor their oath of office and stand for what’s right.

2. Signs of Decay. The Supreme Court redefined marriage for some. With a majority of Catholic Justices, we also wonder how that could happen, but with homosexuality plaguing the priesthood, there’s tolerance for all who tolerate our “lifestyle.” We might wonder “What Ever Happened To Sin?” as Dr. Menninger asked. Christ said end-times would be as the days of Lot. Destruction fell as Lot fled Sodom. Luke 17:29.
3. Signs of Destruction. Six nations ended a 12-year standoff in a nuclear agreement with Iran, and the ink is hardly dry when Iran is not agreeing with what they agreed. “The day of the Lord comes as a thief in the night, for when they say ‘Peace and safety,’ sudden destruction comes…” This isn’t just military strategy. It’s according to Saint Paul and “the day of the Lord” is the end-time apocalyptic period linked to the solar eclipse and blood moons that we saw this year, Joel 2:31.

4. Signs of War. Gabriel said the horns on the ram in Daniel’s vision were kings of Media and Persia, but those areas are now Iraq and Iran with Gabriel also saying the vision was “at the time of the end” as some best-selling authors are now seeing in a reapplication of Daniel’s 8th chapter…
Daniel saw a ram was pushing west, north and south, Dan 8:5. West is Europe and its invasion by Islam is apocalyptic. North is Russia. In spite of 12% of the population, Islam is not satisfied; they bombed a Russian airliner. South is Africa where Islamic Boko Haram has been as barbaric as ISIS.

5. Signs of Martial Law. In Christ’s warning of end-times, he said to flee “when you see the abomination… standing where it ought not, Mark 13:14. The early believers understood that reference to military and when the Roman army came to Jerusalem, they fled and were spared the siege by Titus in 70 AD. But now, US military stood “where it ought not” in a drill (JADE HELM) covering the southwest USA last summer.

6. Signs of Religion. It was Rome that brought the military and “history repeats” with a Catholic-run CIA. President Reagan appointed an ambassador to the Vatican, violating our Constitutional church-state separation, and he approved REX 84 for internment camps of illegal aliens.

Do we worry about government terrorist acts–burning the Branch Davidians and then bombing the Federal Building in Okla City where the Waco records were stored? The BATF didn’t go into work after a bomb drill placed charges on supporting pillars. One was found after it didn’t go off, but blamed on a truck bomb in front. Searching YouTube, one can find similar information for Building 7 that wasn’t hit on 9-11 but came down.

Online evidence shows the government is looking at Bible prophecy believers as “potential domestic terrorists”! Paranoia as a systematized delusion with a projection of one’s personal conflicts on the supposed hostility of others. Bible believers don’t do terrorist acts, but psychiatry understands the projection of guilt when the Bible says, “You who judge do the same things.”

Leaders everywhere should recognize what made America great was the Constitution that kept the pope and priest out of government, in contrast to all nations south of our border. Their poverty for hundreds of years while America prospered should make any sane person realize the insanity of a UN-Catholic New World Order (Novus Ordo Seclorum below the pyramid on our $1 bill.) Revelation suggests that it will compel false worship and bring the plagues. Congress needs to stop the flood of immigrants and review their oath of office or we will have martial law under UN troops as chaos like Paris comes here.

For more information, please get Apocalypse 2016 Free on Friday & Saturday, Nov 27, 28  at http://amzn.to/1PQ4XFI If you miss the free promotional, The Alpha & Omega Bible Code offers a broader view and has mostly 5-star reviews at http://amzn.to/1iXKH8n

Violating our Constitution’s separation of church and state, Congress invited the pope and he charmed them with his “great words.” Daniel 7:8,11,20,25 mentions the “great words” of the “little horn” that the Protestant Reformers said was the papacy as it grew out of the 4th (Roman) empire when it fell. The “great words” bring judgment in Daniel 7:9,10, so we should look at the pope’s agenda that congress is embracing.

The “great words” could include the pope’s title, Vicarius, Filii Dei. The reader can see how the Roman numerals add up to 666 by typing the title into Google. 666 reminds us of the Bible warning in Revelation 13:18, and it will become the mark of the beast power when false worship is compelled under the UN New World Order.

The great words include the pope’s “common good” agenda. This is a well-disguised plan to respect Sunday as a religious institution for “family values and…Creation” in spite of the Creator’s intent for the Sabbath to be the memorial of Creation. This is the 4th Commandment, but it was banned from courtrooms and classrooms by a class of people who later want their own brand of sex education.

We can see the commandments in Exodus 20. The apostles worshiped “every Sabbath” in the book of Acts, (15:21; 18:4, but it only mentions the “first day” once) and nothing to show that God or the apostles changed the day of worship to honor the heathen’s day of sun worship. Some say it’s the resurrection day.

Baptism is the memorial of the resurrection in Romans 6. Some say Sunday is “the Lord’s day,” but the Bible doesn’t show it; Christ is Lord of the Sabbath in Mark 2:28. In the end, Sunday will be the mark of Rome’s authority. And when laws are made to compel false worship, it will become the mark of the beast, Rev 13:15-18.

2015 with the above six signs has been full of omens–ominous of impending judgment. The Bible says “Judgment must begin at the house of God.” 1Peter 4:17. Please consider Three Reasons Why Seventh-day Adventists may be surprised to see calamity include them (when it falls on America for the above reasons). Please visit TheBridegroomComes.wordpress.com

About the Author:
Dr. Richard Ruhling is a retired physician with a special interest in Bible prophecy. He is the author of The Alpha & Omega Bible Code that has mostly 5-star reviews on Amazon at http://amzn.to/1iXKH8n
This information introduces his latest ebook, Apocalypse 2016, also on Amazon at http://amzn.to/1PQ4XFI He has a blog on current events and Bible prophecy at http://News4Living.wordpress.com