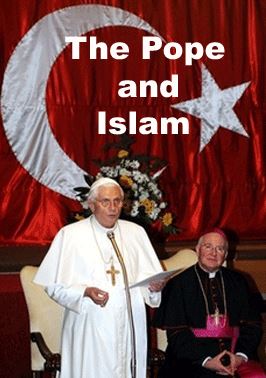 The Vatican strategized through Mohammed’s wife, Khadijah, a wealthy Catholic who arranged for her Catholic cousin, Waraquah, to mentor young Mohammed. (Google) more information in video link below.

Both religions have Mary, Fatima and war to force conversions in common. Islam’s Quran is militant against infidels, but they learned it from Rome’s crusades to drive infidels from Jerusalem because the Vatican wanted it and still does, to be in charge of the ‘holy places.’ (Video linked below)

While that explains the connection to Islam, the most solid link is seen in the Bible as it describes a harlot in Revelation 17, where six clues can only fit the Vatican, a word that means divining serpent. (Google)

Brendon Burchard, NY Times best-selling author, says, “People support what they create.” Rome is no different. It supports its creation, Islam. That’s why the pope encouraged Europe to open its doors to millions of Muslims, but maybe the strategy includes causing a crisis so the pope can offer the solution—global government.

The danger is that we think the world will be better with a ‘moral’ leader like the pope. The imagery of Revelation 17 suggests this will happen with the pope (represented by a harlot riding the beast of New World Order.

Rome wants to regain its lost supremacy in the Old World, but New World Order, or Novus Ordo Seclorum (words under the pyramid on our $1 bill) run by the UN will be worldwide and favored by Catholic nations voting for the pope or the many other nations deceived by liberal cosmetic talk and kissing the Buddha, etc.

This is not Catholic-bashing of millions of sincere Christians who are concerned and who protest their church’s liberal agenda. Many of them don’t understand the relevance of Bible information for our time, but God winks in our times of ignorance, Acts 17:30.

When Christ was asked about the end of the world (Matthew 24), the discussion began with the destruction of Jerusalem. Obama paved the way with his refusal to veto a UN bill by 14 Arab nations hostile to Israel…

“The day of the Lord comes…all nations against Jerusalem to battle…house rifled, women ravished…half the city goes into captivity. Then the Lord will go forth against those nations.” Zechariah 14:1-3.

How does the Lord fight against those nations? Probably by the G.O.A.T.—Global Organization Against Terrorism—the imagery seen in response to a militant Muslim ram that is pushing west, cited in Daniel 8. Truth is stranger than fiction. It’s just as interesting and more reassuring. http://IslamUNinProphecy.wordpress.com

Dr. Richard Ruhling is an author/speaker on current events and Bible prophecy. His “Alpha & Omega Bible Code” has mostly 5-star reviews on Amazon, http://amzn.to/1iXKH8n and has a section on Daniel. Those who don’t do Kindle can get a copy at his website, http://TheRichardRuhling.com/book. He may be contacted for speaking at Ruhling7@juno.com