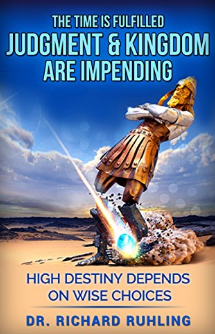 1. A rare solar eclipse on the equinox followed by

2. A blood moon on Passover. “The sun shall be darkened and the moon turned to blood before [paniym, facing] the day of the Lord.” Joel 2:31.

4. The re-definition of marriage by the US Supreme Court to include homosexuality, forbidden in biblical law, “lest the land vomit you out,” Leviticus 18:22-25

5. The JADE HELM drill [Homeland Eradication of Local Militants] “When you see the abomination standing where it ought not…” Mark 13:14. Early believers understand Christ’s warning to be the Roman army in 66 AD, fled Jerusalem.

6. Rome was also “standing where it ought not” as the pope appealed to US Congress for his agenda, closure of business on Sunday to save greenhouse gases [so everyone could have the benefit of the eucharist [Laudato Si’, par. 237 online].

7. Papal visit to the United Nations: “Great words” of the horn in Daniel 7 is the context of the judgment, verses 8-11. Daniel 7 represents the kingdoms of the world as fierce beasts of prey. The Protestant reformers all saw the papacy as the “little horn” growing out of the 4th beast, Rome, fitting verse 25.

The ‘peace and safety‘ sign was repeated on the International Day of Peace, September 21, 2017 with the theme for the year, “Peace, Respect, Safety and Dignity for All.” Two days later, “the Great Sign of Revelation 12” was in the sky—a never-before convergence of constellations and planets. The sun was in Virgo with a crown of 12 stars (Leo has nine plus three planets) and the moon in the belly area exited between her feet after nine months.

“Rapturists” pounced on the sign as for a rapture, another example of the wedding parables being misunderstood by the fictional “Left Behind” series. Dr. Richard Ruhling, author on current events and Bible prophecy, says God doesn’t put the “Bridge Out” sign on the bridge—He puts it before we get there. The sign with nine-months of ‘pregnancy’ points to this spring and confirmation of it will be the destruction of Jerusalem seen in Zechariah 14…

“The day of the Lord comes [signaled also by #1-3 in texts above]…all nations gathered against Jerusalem to battle.” Most Christians think this was fulfilled in 70 AD, but Matthew 22 shows it as part of a wedding parable and there was no wedding in 70 AD according to Ruhling who explains…

God executed judgment on Egypt [Exod 12:12] and took Israel to a covenant by which they became His kingdom [Exod 19:5,6 and Bride, Jer 3:14. Paul included the Exodus in “all those things happened for our examples…ends of the world.” 1Cor 10:1,1l. This offers a different meaning ot the wedding parables.

When the disciples asked if Christ would restore the kingdom to Israel in Acts 1, He replied, “It is not for you to know the times and seasons.” Paul explains, “Of the times and seasons…the day of the Lord comes as a thief, when they shall say ‘Peace and safety,’ sudden destruction comes as travail on a woman with child.” 1Thess 5:2,3.

“Travail on a woman with child” fits the 9-month pregnancy of the Great Sign and reminds us that Egypt travailed as Israel became God’s “first-born” in Exodus 4:22. But first-born implies another event and Revelation 15 offers insight to 144,000 who sign the song of Moses—a song of their experience like Moses.

God used Moses to bring Judgment to Egypt and He will use an anointed group of 144,000 that are said to be virgins–not male Jews living in Israel, but the wise virgins of Matthew 25 that get into the marriage—a covenant relationship in which God will take down the kingdoms of this world as seen in Daniel 2–

“In the days of these kings shall the God of heaven set up a king…it shall break in pieces all these other kingdoms” verse 44,45. A parallel passage is Isaiah 41:14,15. This is not about guns—it’s about the Word of God that Moses was citing. Anyone can confirm this by looking up the texts to the world’s #1 best-seller. Those who don’t read it have no advantage of those who can’t read.

For more information, readers can get fre*e copy of The Destruction of Jerusalem: a Sign for US of Good News Amid Impending Calamity, on Amazon Saturday, Jan 27 at https://www.amazon.com/dp/B06X3W68DX His website is http://MayJudgmentDay.com and a short video here–